The black opaque stretch wrap serves its purpose of concealing your valuable goods. It is instrumental in deterring theft and protecting your goods. Particularly so when UV light may cause fading of your products or that your cargo is of high-value items.

However, there are significant potential setbacks to using the market available coloured stretch wraps that many do not realise or choose not to see as a big deal.

Here is one setback that is particularly concerning for Thong Guan. 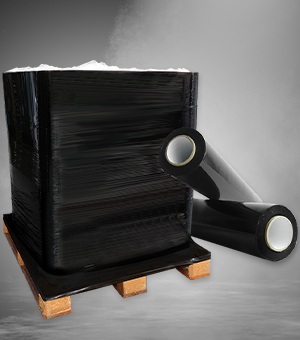 The black opaque stretch wrap in the market are probably around 17 µm to 23 µm. You will most likely stretch the film up to about 200% during wrapping.

The film’s opacity is reduced when that happens, turning it almost transparent.

Overstretching your black film reduces the opacity much.

Well, that may not be a problem for some. Just wrap more rounds, they say.

Well, it is a problem for us.

Overwrapping to compensate for the low opacity means film wastage and unnecessary use of resources.

And at the cost of performance too. Does it even promise a high containment force?

Producing black opaque stretch film involves an intricate balance between function and performance. And it impacts your costs tremendously over time.

So the question lies in what is the optimum balance between function and performance and cost?

That is why the formulation of the film is critical to us in helping you achieve function, performance and cost-saving.

So we ask ourselves: How can we formulate an opaque film that enables you to cover your goods optimally without wastage while maintaining high load containment that gives you wrapping consistency?

After much consideration, formulation and testing, weighing out all that is important to providing an excellent opaque film that performs consistently, we’ve got ourselves Maxstretch Stealth.

The film’s stiffness and low gauge give you excellent load containment, enabling a secured unitised load.

The low gauge means less stretching is needed, which means you can retain the opacity to conceal your goods.

Combined with its already high opaqueness, there’s no need for more wrapping to achieve complete concealment.

With the 30% recycled content, you get the perfect opaque film that offers you wrapping and performance consistency while meeting your sustainability goals.

The black opaque stretch wrap to go for

All in all, Maxstretch Stealth gives you an overall reduced cost of wrapping per pallet. The reason is simple, no need for increased resolutions to increase the obscurity.